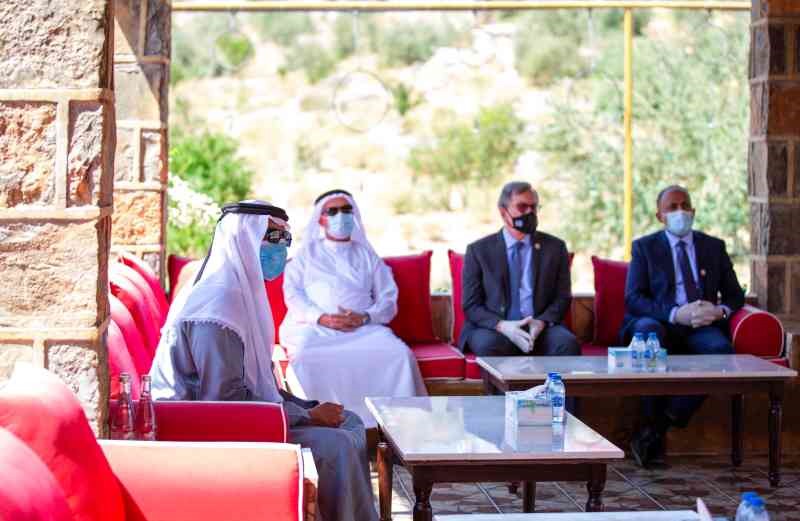 His Highness Sheikh Saud bin Saqr Al Qasimi, Member of the Supreme Council and Ruler of Ras Al Khaimah, confirmed that education is the main guarantor for preserving the achievements and gains, and the key pillar for continuing the process of building the Country, strengthening and enhancing its regional and global presence and contributing to establishing human civilization.
His Highness said: “Here we stand today before another achievement that our students shall realize in their march towards leadership”, praising the wise vision of His Highness Sheikh Khalifa bin Zayed Al Nahyan, the President of the Country, May Allah protect him, and His Highness Sheikh Mohammed bin Rashid Al Maktoum, the Vice President, Prime Minister and Ruler of Dubai, May Allah protect him, and His Highness Sheikh Mohammed bin Zayed Al Nahyan, Crown Prince of Abu Dhabi and Deputy Supreme Commander of the Armed Forces, which has placed education at the top of priorities and at the forefront of comprehensive development plans, in recognition of the importance and vital role of education in strengthening the position of the Country at the regional and global levels in various fields and at all levels.
This came during His Highness’ reception of a group of American University of Ras Al Khaimah students, who worked on the first miniature environmental satellite «Mezn SAT» Project, which represents the first one of its kind in the country, under the supervision of the United Arab Emirates Space Agency and in cooperation between the American University of Ras Al Khaimah and Khalifa University of Science and Technology, to be the first scientific satellite in the State to be built by university students.
His Highness praised the outstanding efforts exerted by the students to achieve success and said «I congratulate you for this success. It is an important step in the history of the Country’s achievements in the space sector. We hope that greater steps would follow, whether at the academic level of the university or in your career in the future. »
Development
His Highness added «Our wager in the United Arab Emirates continues on education as being the main facilitator of the sustainable development process and human development as the most important element in continuing the building process and in strengthening the  presence of the Country in various fields. The education development and transition from theoretical aspects to practical application and production are an indication that we are moving in the right direction. I am proud of the efforts of our promising youth and the contribution of the Emirate of Ras Al Khaimah to this new civilizational achievement of the Country. »
His Highness said: «There is no doubt that investing in the human element represents the real and actual investment that the United Arab Emirates has been based on since its inception. This qualifies us to compete globally at all levels and in all fields. »
His Highness stressed – at the end of the meeting – that success and excellence are the results of many factors, the most important of which are hard work, assiduousness, diligence, and having clear objectives that enable generations to reach their goals, then he emphasized his continued and constant support provided for the educational system and pioneering scientific projects at all levels.

Saud bin Saqr: The flag of our state is deeply rooted inside us like mountains

Ras Al Khaimah is the capital of Gulf tourism

Mohammed bin Saud: Flag Day reflects the values of loyalty and belonging to the homeland