RAK Chamber of Commerce and Industry 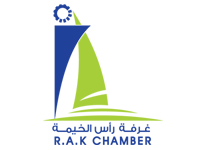 Ras Al Khaimah Chamber of Commerce and Industry is an independent institution of public interest and has a legal entity with both financial and economic independence.  Established in the 22nd of October, 1967 with an Amiri decree of the late Sheikh Saqr bin Mohammed Al Qasimi. It is the second chamber of commerce to be launched in the United Arab Emirates.  Since its foundation the Chamber represents the private sector in Ras Al Khaimah with its various commercial, production and service activities. The membership to this chamber is mandatory to all those who practice commercial, industrial or professional activities, inside the Emirate of Ras Al Khaimah, for companies and corporations concerned with internal and external business, whether their main centre of activities is located in the Emirate, or they have a branch, a number of branches or an agency there.  They are obliged to obtain the membership of the Chamber before practicing their activities.
Since its foundation, the Chamber sponsors and organizes the commercial and industrial interests of the companies and institutions as well as safeguarding and representing them in addition to providing them with the advices and suggestions on all issues associated to the economic affairs, particularly on what is concerned with activating commerce and industry, more than protection and guidance in that respect, thus finding solutions that guarantee the right of members with less time and effort.
Also it endeavors to create an attractive and secure environment for investment that guarantees the rights of all its members through the commercial mediation service to reconcile the commercial disputes.
The Chamber is very keen in providing the decision makers with information and opinions concerning the commercial and industrial issues, thus updating them with all the new developments in the business sector. Out of the pivotal role of information in helping the private sector growth, being very strict in updating information timely and permanently, working hard to make Ras Al Khaimah Chamber of Commerce and Industry, the pioneer in promoting a progressive economic climate that seeks the elevation of commercial and industrial business and services, contributing in the sustainability of the economic and social growth.
The Chamber also plays a key role in constituting the link between the businessmen and the projects’ owners in the Emirate with their peers across the world.  Thus finding mutual opportunities to attract investors and selling up Ras Al Khaimah as an attractive investment hub to the big international companies.
Ras Al Khaimah has a number of initiatives, one of them is Ras Al Khaimah Exhibition Centre which was launched in April 1996 by the Late Sheikh Saqr bin Mohammed Al Qassimi, which plays a vital role in activating the tourism and economic activities in the Emirate Ras Al Khaimah.  Another initiative is Saud bin Saqr Foundation for Youth Projects Development, launched by the directives of His Highness Sheikh Saud bin Saqr Al Qassimi, Supreme Council Member and Ruler of Ras Al Khaimah, in May 2008, targeting the provision of support to the projects’ owners in various fields, strengthening and promoting the small and medium enterprises inside the Emirate, in addition to the Ras Al Khaimah Centre of Reconciliation and Commercial Arbitration, which was founded in 2008, which is an independent and permanent non profitable organization, that provides commercial arbitration and reconciliation for commercial disputes settlement at the local, regional and global levels at suitable costs.
The Board of the Chamber of Commerce and Industry is the governing authority that administers all the Chamber affairs.  It can discharge its powers and roles and takes the appropriate decisions that it find suitable to realize the Chambers objectives within its terms of reference. The board is formed of fourteen members and chaired by His Excellency Mohamed Ali Musabbeh Al Nuaimi.